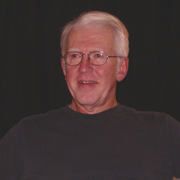 Terry Balderson, CPA, serves as a strategic Advisor to Legacy®. Also known as the MatrixMaster researcher, he is a consultant to prominent US political figures as well as a select group of individuals and corporations. Terry worked with Capital Formation Counselors, a management and economic consulting firm, for over 25 years, and served as its President for 11 years. Terry also serves on the Advisory Board of StoryShare®. Renowned for his passion for fitness, Terry works out daily, and is kind, and big-hearted. When he is not working, he may be found on a video teleconference with one or more of his six grandchildren.

Terry has conducted interviews for Legacy of many leading personalities including Monte Irvin, Mr. Paul Staley and Mr Frank Vizcarra. He has further opened his formidable personal and professional networks to secure interviews with Dr. Norman Borlaug and Dave Beck, both of whom have been pivotal to Legacy’s work.