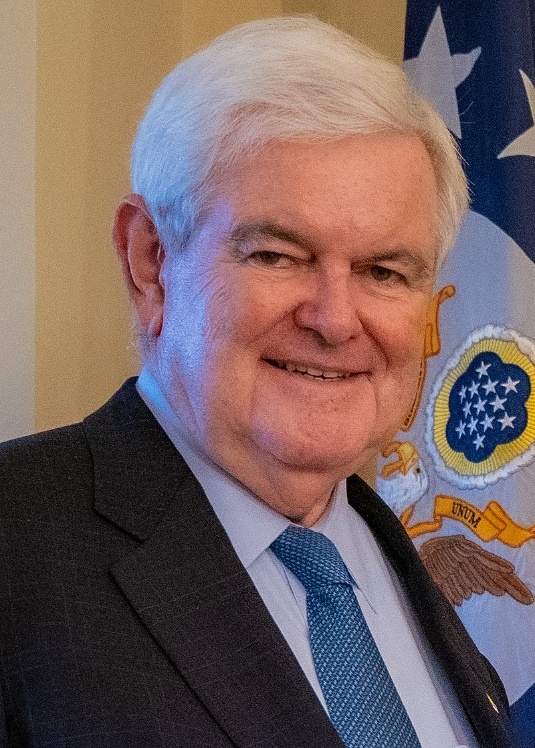 Newt Gingrich is well-known as the architect of the “Contract with America” that led the Republican Party to victory in 1994 by capturing the majority in the U.S. House of Representatives for the first time in forty years. After he was elected Speaker, he disrupted the status quo by moving power out of Washington and back to the American people. Under his leadership, Congress passed welfare reform, the first balanced budget in a generation, and the first tax cut in sixteen years. In addition, the Congress restored funding to strengthen defense and intelligence capabilities, an action later lauded by the bipartisan 9/11 Commission.

Today Newt Gingrich is a Fox News contributor. He is a Senior Advisor at Dentons, the world’s largest law firm with more than 6,500 lawyers in 50 countries and offices in more than 125 cities. He advises the firm’s world-class Public Policy and Regulation practice. He is also a Senior Scientist at Gallup.

From May 2011 to May 2012, Newt Gingrich was a candidate for the Republican nomination for President of the United States, winning the South Carolina and the Georgia primaries. The campaign was especially notable for its innovative policy agenda, its effort to bring new coalitions into the Republican fold, and for Newt’s debate performances. His $2.50 a gallon energy plan set off a nationwide discussion about the use of America’s energy resources.

As an author, Newt has published 35 books including 15 fiction and nonfiction New York Times best sellers.

Non-fiction books include the #1 New York Times best seller, Understanding Trump, in addition to Breakout, A Nation Like No Other, Ronald Reagan: Rendezvous with Destiny, To Save America, Rediscovering God in America, 5 Principles for a Successful Life, Drill Here, Drill Now, Pay Less, Real Change, A Contract with the Earth, Winning the Future: A 21st Century Contract with America, To Renew America, Lessons Learned the Hard Way, Saving Lives & Saving Money, Window of Opportunity, and The Art of Transformation. He is also the author of a series of historical fiction books including, Gettysburg, Grant Comes East, Never Call Retreat: Lee and Grant the Final Victory, 1945, Pearl Harbor, Days of Infamy, To Make Men Free, To Try Men’s Souls, Valley Forge, and Victory at Yorktown. These novels are active history studies in the lessons of warfare based on fictional accounts of historical wartime battles and their aftermaths. His latest novel, Vengeance, is the third volume in his bestselling Brooke Grant series, which includes Treason and Duplicity. These novels are political thrillers focused on Washington intrigue and international terrorism.

Newt and his wife, Callista, have hosted and produced historical and public policy documentaries. Recent films include The First American, Divine Mercy: The Canonization of John Paul II, A City Upon A Hill, America at Risk, Nine Days That Changed The World, Ronald Reagan: Rendezvous with Destiny, Rediscovering God in America, Rediscovering God in America II: Our Heritage, and We Have the Power.

In his post-Speaker role, Newt has become one of the most highly sought-after public speakers, accepting invitations to speak before prestigious organizations throughout the world. Because of his own unquenchable thirst for knowledge, Newt shares his unique and unparalleled insights on a wide range of topics.